My love of horses began when I was 7 years old and I went to visit my Dad for vacation. He signed me up for horseback riding lessons and I've been hooked since. I've had at least one horse since I got my first pony when I was 9, and even though I don't ride nearly as much as I once did, I just enjoy being around these beautiful creatures. 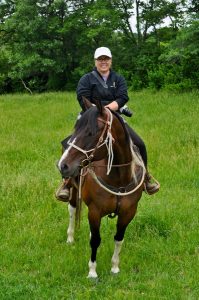 I hate mares but somehow I ended up with them. My girl Allie is a prime example of why I hate mares, but for whatever reason I absolutely LOVE this girl (attitude and all).
​When I went to look at Allie I was told anyone in America can ride her but she's not for a beginner. I didn't understand what the guy meant until I got her home. Yes, if you can sit on a horse, you can ride Allie, but if you don't know what you are doing on the ground I would really hate to see how bad this girl would take advantage.
I purchased Allie as my new trail partner. I picked her up on a Friday, took her to the vet, and took her trail riding on Saturday. She is a powerhouse trail horse. I never worry about her getting me out of a sticky situation, she keeps her mind (and it's a good one) in all situations, alone or in a group - leading or following.
I think it was the second trail ride I had Allie out on; we were leading the group and came to a small ravine that looked like it was a little muddy, but not bad. I gave Allie her head, a little squeeze and down she went, straight into (no joke) mud up past her knees. Sure she was going to freak out, I sat completely still waiting for the explosion. The gals behind me telling me to get off...I did step off since I was even with the bank, unraveled her lead rope and asked her to turn around and climb back out. She quietly and slowly "unstuck" her butt, turned and came back up the bank. Then she just stood there and looked at me like I was a complete idiot. I've never doubted her since. You can tell she's been rode pretty hard in her life. She's well trained, but has some leg and arthritis issues. She will live out her days here with me; be my trail partner as long as she can and then just hang out, bossing all the other equine around. 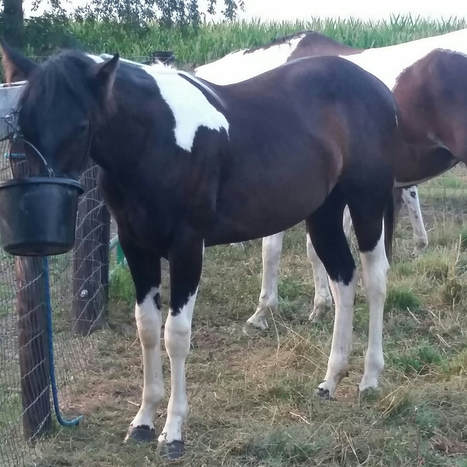 ​Sepia is my future trail horse, I hope!
​There was a stallion, Sea Paints Ditto that I knew his entire life. Ditto was a great stallion, he may not have been a champion whatever stallion but he had a brain. I'm talking a brain that any person raising colts prays for.
He was also athletic, and smooth. Wow, he was smooth. Ditto was ageing and I wanted one more baby by him so purchased a mare with the sole purpose of breeding to him one more time. This breeding resulted in Sepia. She is his last  baby, he passed a little over a year later. Sepia is beautiful, she has the brain I was hoping for, and looks like she's going to be pretty smooth. Sepia is everything I was hoping for (except she's a she) which makes her priceless to me. The fact she is the last baby out of this wonderful stallion makes her precious to me as well.
​Sepia will hang out here doing ground-work and being a horse until she's around 5 and then she'll step up and be my next trail partner.

​Reba
​Unregistered miniature horse
Short, very, very short
Adopted 2014, est at 3 years old when adopted
​
This is Reba and she holds the title of most worthless pony on the planet.
​I adopted Reba as a friend for Toby since he can't always be out with the big horses. She was supposedly started driving (not really), and okay as a lead line pony (yes, if you hate your kids).
​She puts up with getting brushed, has to be in the mood for a hoof trim....she basically just likes to stand around and eat.
​I'm sure it sounds like a hate the little garbage disposal, but I don't.
​Maybe one day I will decide Reba should earn her hay and learn to do something, we'll see...so far her big attitude has outlasted my attempts to turn her into an actual usable pony.
Gone but not forgotten... 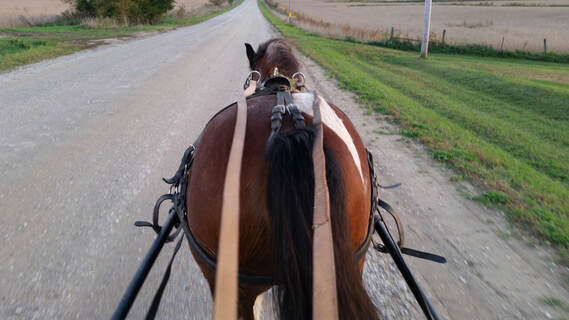 ​Toby
​Unregistered Shetland Cross
10.2
Purchased 2006, est at 6 years old when purchased
​
I loved this pony.
He was as frustrating as any pony can be but put him in harness and he was completely unflappable. Toby was the pony you could hook up once a year and drive down the highway without a single issue. Unfortunately, his pony attitude ultimately ended his life.
The winter of 2018-2019 was harsh in Iowa. One Saturday I was driving home just when the weather was starting to turn. I went off the road and wrecked my vehicle and got caught in the start of an ice storm on my walk home. Cold and soaked I grabbed Reba (my mini and Toby's best friend) and was moving the ponies from the woods to the barn. Toby, being a little turkey was acting like his normal "you can't catch me" self but knowing he would follow Reba I just opened the gate and started toward the barn. Toby was running circles around us and slipped on the ice. When he couldn't immediately get up I thought he broke a leg. It took me all of 30 seconds to realize it was much worse.
​Toby broke his neck in that fall and before I could even get to my phone to call the vet he had taken his last breath. I was heartbroken. Toby is buried at a friend's acreage along with some of the finest horses I've had the pleasure knowing. I will always miss this little guy with the big attitude.